The Koto is the Japanese member of the family of long zithers with movable bridges found in several East Asian countries. Some of the other members of the zither family are gu zheng, gu qin in China, kayagŭm and Kŏmun’go in Korea, Đàn tranh in Vietnam and wagon in Japan. In organology the koto is a plucked chordophone. It is believed that the zithers originated in China. It is generally assumed that the koto was introduced to Japan in the beginning of the Nara period (710–84). 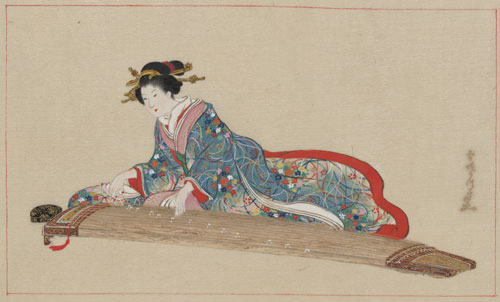 The koto has a long slender rectangular body (about 180 cm in length x 24 cm at midpoint) and is made of kiri wood (Paulownia imperialis). There are 13 silk strings of equal length and thickness, stretched under equal tension over fixed bridges. Today materials such as nylon and tetron are also used. The length of the vibrating part of the strings is determined by the placement of movable bridges called ji, each string having one bridge. The ji are traditionally made of wood or ivory while plastic is also used today. The placements of the ji determine the tuning. The strings are plucked with bamboo, bone or ivory plectra (tsume) of varying shape depending on the player’s school.

The koto is an important instrument for shakuhachi players due to the traditional ensemble music sankyoku (music for three) and the modern repertoire for shakuhachi and koto.

The koto has – unlike the shakuhachi – not undergone any essential changes since its introduction into Japan. However, several types can now be distinguished, depending on the musical genre or school in which they are used. The koto may be classified into four groups. It is the two latter groups shauhachi players are concerned with:

2.     The tsukushisō-goto (used in the older tradition of koto music)

3.     The zokusō-goto (used in the later tradition of koto music)

4.     The shinsō-goto (the group of new koto types, including the jūshichigen (17-string bass koto), many of which were invented by Miyagi Michio (1894–1956) and which are used in specially composed music.

The player sits behind the instrument and wears tsume (plectrum) on the thumb, index finger and middle finger of the right hand. The left hand is used to provide pitches not available on the open strings by pressing down on a string to the left of the movable bridge, raising the tension of the string and thereby the pitch. The left hand is also used to produce ornamental pitch inflections. Direct plucking of the strings with the left hand is a technique that began to be used from the late 19th century. The koto became and important household instrument and is considered a valuable adjunct to a refined upbringing and education especially of girls. However, this role was surpassed by the piano after the Meiji period (1868-1912).

Below are some examples of koto tuning:

String 1 is in unison with string 5 in classical pieces.

String 1 is usually an octave below string 5 in modern pieces.

Sōkyoku is the term for koto music in which the koto has a solo role. Sōkyoku, as we know it today, can be traced back to the last decades of the 16th century. Sōkyoku was one of the most common music genres during Edo period (1603–1868). During the last years of the 19th century the increasing Westernisation of Japan including music began gradually to transform the koto tradition.

The koto has a background as an instrument played professionally by blind men. The three main ryū (schools) of koto music is the Yatsuhashi-ryū, the Ikuta-ryū and the Yamada-ryū. Beginning in the Meiji period (1868–1912), gradual Westernization of sōkyoku led to innovations within the Ikuta- and Yamada-ryū, as well as to the formation of new schools such as the Sawai school.

The Ikuta-ryū was founded in 1695 Ikuta Kengyō (1656–1715) in  Kyoto and became popular in the Kansai area (around Osaka and Kyoto). Ikuta established a close collaboration between the koto and the shamisen in the performance of jiuta and opened a door to new developments in koto music. In this context the term jiuta (regional songs) refers to lyrical songs. In the Ikuta-ryū the shamisen could be replaced by the koto, although the combination of koto and shamisen was more common. It is typical of the Ikuta-ryū that in such ensembles the leading musician plays the shamisen, not the koto.

Only at the end of the 18th century did Edo acquire its own school of koto music, the Yamada ryū, named after its creator, Yamada Kengyō (1757–1817). Also Yamada ryū ‘modernised’ by absorbing features of shamisen music.

The Yamada ryū was more influenced by narrative and dramatic shamisen music.

In Yamada ryū, which also combines the koto and the shamisen, the main function is assigned to the koto, the shamisen having mostly an obbligato part.

The Sawai Koto School was founded in Tokyo in 1965, and has become a centre of modern koto music in Japan. The Sawai school is known for virtuosity, new compositions and improvisations. The late founder of the school, Tadao Sawai, was a virtuoso koto player and composer. Both Tadao and his wife, Kazue Sawai, also an acclaimed koto player, had endeavored to make Japanese music known internationally by taking their music to concerts and music festivals around the world. In 1979 the Sawai Koto Academy was founded in Tokyo. Today several branches exist in Japan and abroad.

In the last decade of the 19th century sankyoku (‘music for three’) became especially popular: this was a performing practice in which a third instrument was added to the usual ensemble of koto and shamisen. Earlier this third instrument had often been the kokyū (spike fiddle), but it was gradually replaced by the shakuhachi; it plays another variant of the existing melody. Since then the Yamada and Ikuta schools have continued to flourish, transmitting their traditional repertories.

The koto became a favoured instrument for experimentation with combinations of traditional Japanese and Western music. Meiji shinkyoku (new music of the Meiji period) flourished mainly in Osaka due to Suzuki Koson’s (1875–1931) response to Western music. However, the biggest innovation and later on influence was accomplished by Miyagi Michio who was a blind koto player himself.  His compositions included chamber music for Japanese instruments, orchestral use of Japanese instruments, combination of Japanese and Western instruments and invention of new instruments such as the jūshichigen or the 17-string bass koto. Miyagi’s influence continue to be very strong today.